The SGP-QCB Upper Assembly
TNW Firearms has revolutionized the modern rifle with an innovative design that utilizes a built-in Gas Piston System with an integral Quick Change barrel! This new piston upper has a quick change barrel and free float quad rail handguards made of heat treated steel to make it lightweight and virtually indestructible.

This new style upper, Model SGP-QCB, allows the shooter to change the barrel and the incorporated gas piston system in seconds! The design allows for easier cleaning, caliber changes, and various barrel lengths. Adapt from 10″ to 24″ in seconds. Caliber conversions: .22cal-.223in, 7.62x39mm, 5.45x39mm, 6.5, 6.8mm. This system is sold as a complete upper which comes with bolt, carrier, charging handle, and gas piston barrel assembly.

TNW Quick Change Upper/Handguard Assembly Upper allows for barrel assemblies to be rapidly removed and installed. When operated, two levers on each side of the handguard allow for barrels to be removed and installed from the front. No torque wrench or adjustments are required. Quick change barrels allows for a variety of calibers and barrel lengths to be used with one upper receiver. Included with the Upper is the attached free float, quad rail handguard. The Quick Change Upper accepts standard direct impingement barrel assemblies and bolt carrier groups. The Upper can also be retrofitted for gas system quick change if a new carrier is installed. Rails are removable. 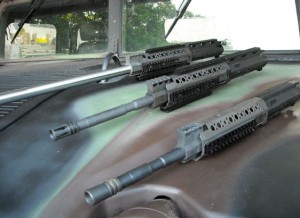