Just spotted this on Brownells. Interesting, inexpensive and reusable tool for proper gas block alignment. Proper gas block alignment is on of those tasks on an AR-15 that on the surface looks simple and theoretically is but the devil is in the details. The first mistake novices make is to butt the gas block against the shoulder, this is wrong. The gas block is required to allow space for a handguard delta ring. Installing the gas block up against the shoulder on the barrel will result in a partially obstructed gas block and an AR-15 that may not cycle properly. The next area of concern is having the gas block level and perfectly aligned with the gas port. If the gas block is canted slightly the gas port will be obstructed and this too will result in an AR-15 that will not cycle properly. Fortunately the Gas Block Genie is here to make getting your AR 15 gas block properly aligned a simple task.

The gas block genie is currently only available for .750 barrels but other barrel diameters are coming soon.

Ever put together an AR build, only to find that your semi-auto cycling system just doesn’t cycle? Looks like that gas-block installation didn’t go as well as you thought it did. Avoid future frustration by adding the Two Two Three Innovations Gas Block Genie to your AR building kit.

Unlike other gas-block alignment tools on the market, the Two Two Three Innovations AR Gas Block Genie Gas Block Alignment Tool can be used again and again, as many times as you want, during your AR build. All it takes is three simple steps. 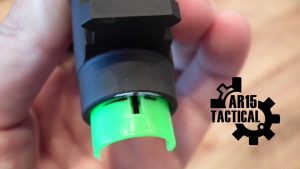 The Gas Block Genie quickly and easily allows you to perfectly align the AR-15 or AR-10 gas block hole with the gas port in your barrel every time.