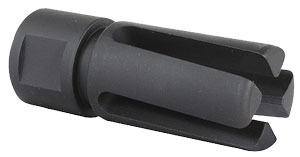 I get a substantial amount of emails asking “What is the BEST FLASH HIDER FOR AN AR 15“. Naturally with so many great options it’s very hard to single out one single AR15 FLASH HIDER as the “Best“. Who has the time and money to test them all? Not me. Fortunately this is one time where sales numbers, website visitors, reviews and YouTube videos mostly agree. The SMITH ENTERPRISE VORTEX FLASH HIDER is with good reason arguably the most popular and copied FLASH HIDER for an AR15 available today. It’s popularity is based on performance and cost about $60. There are other flash hiders that perform just as well and maybe insignificantly better but be prepared to spend two to three times the cost of the VORTEX FLASH HIDER.

If there are two undesirable characteristics of the SMITH ENTERPRISE VORTEX FLASH HIDER the first would be its plain and simple appearance. The second characteristic can be an annoyance to some. The VORTEX has a tendency to “Ring” as rounds are put down range.Watch and listen to the video below.