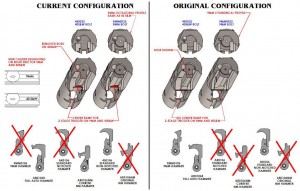 RRA constantly strives to make improvements to our various product lines. As part of those efforts,
we have made improvements to the factory-built LAR-9 9mm Carbine and the LAR-40 .40cal Carbine,
and in doing so have also made changes to the necessary steps and components needed for caliber
conversions into those platforms.
The first exciting change for late 2014/2015 is the move to a ramped bolt in both calibers, primarily
for use with RRA’s 2-stage trigger kits. This modification requires the use of different hammers in the
LAR-9 and LAR-40 in their single-stage (standard) versions. Please see the diagram (below) for ham-
mer compatibility for the new/current and original bolts and hammers. RRA will continue to offer the
“old” 9mm hammer (9MM0106) for those with the originally-configured bolts.

Conversion of an LAR-15 (AR-15-style) lower to either a currently-configured LAR-9 or LAR-40 has
been simplified by the change in the bolts. In addition to the LAR-9 or LAR-40 upper half and appro-
priate magazine, you will need a magwell conversion block assembly in the appropriate configuration
(9MM0115 or 4S0115). If using a CAR-length receiver extension, a 9mm buffer (9MM0107) is
required for the LAR-9 conversion, while a CAR buffer (AR0107A) can be used with the CAR action
spring in the LAR-40. If using a rifle-length receiver extension, both models still require the above-
specified buffers and CAR action springs (AR0072A) and the addition of a handgun caliber stock spac-
er (9MM0073) behind the spring in the longer extension. Either conversion should work properly
with any of the non-notched hammers (and appropriate additional trigger group components) illus-
trated in the diagram. Depending on magwell thickness in your lower receiver, a 9mm mag catch
(9MM0099) may be needed for proper magazine retention

Conversion of an LAR-15 lower into an originally-configured LAR-9 or LAR-40 (no longer offered
directly from RRA, but there are thousands already in use or otherwise potentially available) is also very
simple. This requires a single stage trigger group with a 9mm hammer (9MM0106… please refer to
the diagram) in the lower, along with the appropriate magwell conversion block assembly
(9MM0115/4S0115). Buffer and action spring configurations are the same as with the new configu-
ration (above). Again, the magwell in your lower receiver will dictate whether or not a 9mm mag
catch is needed (in either caliber conversion).
Conversion of an originally configured LAR-9 or LAR-40 lower half for use with the other handgun cal-
iber upper is a very similar process to the LAR-15 to LAR-9 or LAR-40 conversion. The first step is to
verify which bolt configuration your upper features. Refer to the diagram, and look for the ramping
in the indicated position on the bottom of the bolt, the shape of the bolt, and for the caliber mark-
ings on the side of the bolt. If no ramping or bolt caliber designation is present, you have an origi-
nally-configured bolt. If both are present, you have the new configuration. If you have the new con-
figuration bolt and a compatible trigger group (see diagram) to go to 40cal from 9mm, you will need
an LAR-40 feed ramp (4S0115F), LAR-40 bolt catch (4S0103), and an LAR-40 magazine. If you have
an original configuration bolt, you will need to use a single-stage trigger group with 9mm hammer
(9MM0106), as well as the LAR-40 bolt catch, feed ramp, and magazine. You should already have
the 9mm mag catch in your lower if factory assembled. You’ll also need to replace your current 9mm
buffer with a “regular” CAR buffer (AR0107A). To convert from an LAR-40 to a LAR-9 configuration,
and have the new bolt configuration in your LAR-9 upper half, you will need an LAR-9 bolt catch
(9MM0103), LAR-9 feed ramp assembly (9MM0115F) and appropriate LAR-9 magazine. You will also
need to install a 9mm buffer (9MM0107). If you have an originally configured bolt in your LAR-9
upper, you will need an appropriate single stage trigger group in your LAR-40 lower with a 9mm ham-
mer (9MM0106). You will also need the LAR-9 magazine, LAR-9 bolt catch (9MM0103) and LAR-9
feed ramp assembly (9MM0115F). You will also need to swap your CAR buffer for an LAR-9 buffer
(9MM0107).
If you have any questions or need additional information, please contact
RRA Tech Support at 866-980-7625 during regular business hours.