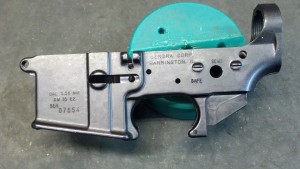 PRE BAN AR 15 information is very valuable to shooters in states that maintain an ASSAULT WEAPON BAN. While I dont normally advocate borrowing content from other websites I feel this information is invaluable and needs to be protected, duplicated and shared for the greater good of the shooting community.

If anyone has more information and links please post them at the bottom and I will update the list. If you have a lower of  from one of the lesser known brands and have managed to verify the date to the serial number please add your info to the comments and I will add it to the master list.

What does my serial number have to do with a PRE BAN AR 15?

Q:  What does my serial number mean?

A: Nothing is more frustrating than to know little or nothing about the firearm you own or are about to buy.  Use the information in this page to help determine when your Olympic Arms AR 15 was produced.  Please read all of the details on this page because there are many questions answered in the following paragraphs.

As many of you already know, on the 7th of June, 2000, Olympic Arms experienced a devastating fire that destroyed our sales offices. In those offices were housed our current as well as archival records with regards to manufacture, acquisition and distribution of firearms. The books that we, as well as all federally licensed firearms dealers are required to keep are commonly known as “Bound Books”, or “A&D” (acquisition & distribution) books.

These books, over 25 years of Olympic Arms history and data, were completely destroyed in that fire. All A& D book records prior to the 7th of June, 2000 are GONE. Period. This is an unfortunate situation that severely limits our ability to provide product information for any and all AR-15 lower receivers and/or complete guns manufactured prior to that date. As a result all that we can provide is what you see below, a date “range” in which your serial number was manufactured.

Many people and organizations have been critical of Olympic Arms for not securing a copy of these records elsewhere, or keeping an electronic file of this data as an emergency back up. If you’d like to read why this decision was made, please read the article in the About Us section titled “Pre-fire Bound Books”.  Remember that Olympic Arms fully complied, and still does, with ATF regulations regarding A&D books.

Additionally, you will see several lines for serial numbers that begin with the same letter(s) prefix. These prefix series are divided by a date range to their right. These date ranges are the beginning and ending dates of the physical paper ledgers in which those numbers were recorded. In other words, the ledger books were not large enough to contain all of the numbers (0001-9999), in one book. For that reason, there is a beginning date and end date for each ledger. That is what you see below.

Match your receiver up with the letter prefixes on the chart below. Each line is separated into 5 columns.

Column 1: The serial number itself (including prefix).

Column 2: The beginning serial number in that book.

Column 3: The beginning date for that book. If there is only one date listed after the serial numbers in column 2 and/or 2, all of those numbers were manufactured on that same day.

Column 4: End date for that book.

Column 5: Comments regarding that range of serial numbers. The comments as listed would apply to all of the serial numbers with the prefix listed to the left.

The folks over at AR15. com have compiled the list below

Disclaimer: This list is correct to the best of my knowledge, however, I accept absolutely no responsibility for the accuracy of this information or for the consequences and/or damages occurring from any inaccuracies. I have compiled this list for the purposes of sharing information only. This is not intended to be used in any way except for personal entertainment. It is a compilation of both personal information and information submitted from others from the Internet. ALL SERIAL NUMBERS SHOULD BE VERIFIED FROM THE MANUFACTURER PRIOR TO ANY PURCHASE OR ASSEMBLY. It should be noted that it is a felony to possess a Post-Ban (newly assembled after Sept 13, 1994) assault weapon.

If any information presented here is found to be incorrect or you have additional information to contribute, please contact me via E-Mail (hkusp40@midmaine.com) and I will update and re-issue the list.

Note: All items marked with a single asterisk (*) are taken from http://home1.gte.net/bblakley/ban/index.htm. The year/serial numbers under Colt SP series was forwarded to me by an individual whose return address I no longer have. Double asterisk (**) under Bushmaster, a person on the internet e-mailed me that he had a lower that was shipped stripped (thus not a complete rifle) in 1991 from Bushmaster with serial #0327XX – ALWAYS CALL TO VERIFY.

No information – Apparently machined from bar stock aluminum, lowers are marked as M-15.

ALL lowers are Post Ban AR 15. Began introduction of lowers and rifles in mid/late 1998. Noted as having good fit & finish. Also, reported to be manufactured by Lewis Machine & Tool (LMT).

Slightly over S/N 30,000 was the Pre Ban AR 15 cut-off, call to verify.* (Some Eagle lowers below the 30,000 range were determined to be POST BAN AR 15 by BATFE – call to verify) Armalite sells Eagle lowers, but sells factory complete rifles with Armalite lowers.

Made stainless steel lowers, rumored to have also made AR-15 pistols. Lower marked M16-SA. This is NOT verifiable info as it came from the Internet. Out of Business.

Lower marked CIA. All are Post-Ban. Made with Olympic Arms Receivers under contract.

Below 10300 – Pre Ban AR 15 Rifles.
Some or all lowers are cast. Black in color. Some lowers are Stainless Steel.

Now called ArmaLite. They will not give out a list, but will look up on an individual basis. Lower receiver serial numbers DO NOT begin with EA.

All are Pre Ban AR 15 Rifles as they went out of business in 1993. (DPMS bought them prior to the Ban) Call DPMS Lower receiver serial numbers begin with EA. Some or all lowers are cast. Light gray coloring. It is rumored that Ruger investment casted the lowers for Essential Arms.

All are post ban (including all of the pistols).

35222 and Below – Pre Ban AR 15 Rifles (Note:Some lowers are cast not forged. Out of business) Post-ban have a year prefix in the serial number. Rumored to have only sold lowers.

Post-ban receivers have a circle milled into the side of the magwell. They were originally bead-blasted to a non-glare finish. All others are pre-ban. (This is unverified info…) Also, they used to be NESARD. Rumored to have been owned by Dick Drasen (currently M&A Parts) and produced lowers only out of Barrington, Illinois. No complete guns were sold (again, unverified info).

Colt Carbine R6521 – Is a rare Colt of which only a few hundred were made for export purposes. They are not marked Sporter, AR-15 or SP1. These are the only Colt AR15 type weapons allowed to be transferred among Connecticut citizens